Wednesday 30th January 2013 was the reason for travelling all this way.  My presentation at BETT was scheduled in the very first speaking spot, at 10.15am on a packed three day program.

Using Photo Booth on the laptop for a quick ‘selfie’ ready to don an outer layer and grab a ‘Boris Bike‘ to ride, with laptop etc in backpack, down to Shadwell station to catch the DLR, (Docklands Light Rail) down to ExCel. 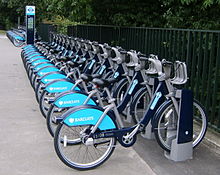 ExCel was one of the venues purpose built for the 2012 London Olympics and hosted a range of sports including judo and weightlifting. It then played host to the London Summit, with speakers like US President Obama.

Despite the DLR being absolutely crammed full with people off to BETT and Cisco live, it was still a very effective way to get there, and the registration process was smooth.

The speaking hall was integrated within the enormous Show area, with lots of background noise. I’d been made aware of this in briefing info and had made sure that slides were simple, yet highly visual.  By the time my session kicked off it was pleasing to see a decent audience.  The session was chaired, and I was introduced by Jim Wynn, Head of Group Education Strategy at Promethean. 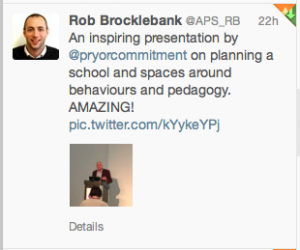 The presentation seemed to go well, with some nice comments in the Tweetstream.

This, from Rob Brocklebank, a teacher from Northern England,

and this, from Tom Doust. 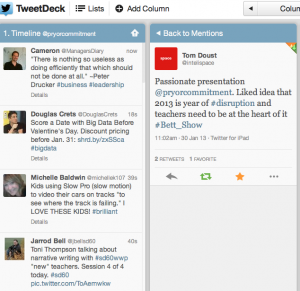 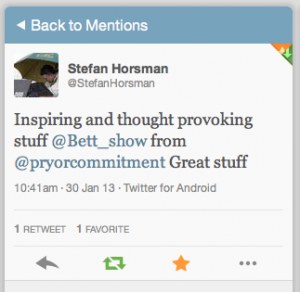 And another from Stefan Horsman, a Deputy Head.

It was then off to the ‘BETT Staffroom’ to use a set of Apple ear buds and mike with the iPad mini to FaceTime with Lynette back in Newcastle.  It worked really well and is certainly an excellent way to keep in touch. 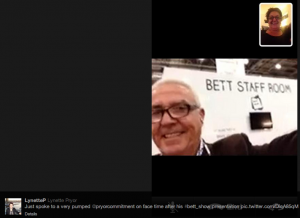 The atmosphere inside the huge Show area was amazing. A vast array of suppliers but a great focus on how the stuff can actually be used to engage and to promote active learning.  It was possible to see real teachers demonstrating what they do using products on display and to see groups of students also outlining how they use various forms of ICT and hands on learning in what they do. 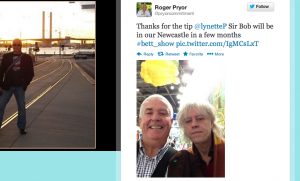 Then, a tweet from Lynette to alert me that Sir Bob Geldoff was at Stand C234.

And, in some shameless celebrity crawling, he was good enough to have a pic taken with me.

Hours of wandering and listening followed until a pre-arranged meeting at the Feedback Booth where I’d be asked to provide a Video Interview to be used as part of the promo showreel for BETT 2014.

The show’s on for another few days and I’ll be taking part in a Transformational Learning Summit this afternoon, and then being part of TeachMeet BETT on Friday evening and looking forward to the chance to hopefully do a quick ‘micro presentation’ for the 250 or so UK teachers present.

In the meantime, here’s a slideshow of images from the day.  It ended with a trip on the DLR back to Shadwell, with some rare sunshine lighting up the high rise buildings around Canary Wharf, and a few cold cans of Abbot Ale juggling around in the backpack on my bike ride back to the apartment.

BETT2013 from Roger Pryor on Vimeo.