Did you ever see something which brings a distant memory bursting to the forefront of your consciousness?  Yesterday, I rounded a corner in Southwark and came upon the Golden Hind: Sir Francis Drake’s flagship.

Drake he’s in his hammock an’ a thousand miles away,
(Capten, art tha sleepin’ there below?)
Slung atween the round shot in Nombre Dios Bay,
An’ dreamin’ arl the time O’ Plymouth Hoe – Henry Newbolt 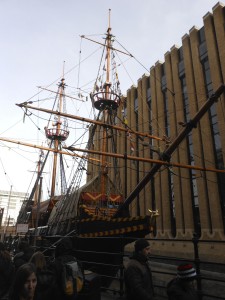 The words from this poem came flooding back along with the awe at someone having set sail to eventually circumnavigate the world in a ship of this size. 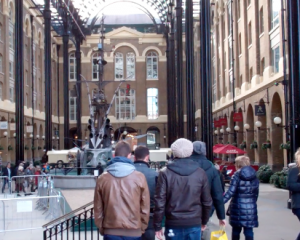 Just along the bank from here, at Hays Galleria,  was a magnificently crafted dock; where the tall ships would be jostled into position to unload their cargoes from far away places.

While we may look back at the growth of the British Empire with a view of some of the less pleasant aspects, and clashes with cultures and entire populations, there is still  a huge amount of admiration to be held for those who sought to expand their view of the world.  While motives may often have been about commerce and strategic power, there was still much which was driven by human curiosity and endeavour.

The Clink, the Globe, and the view of St Paul’s across the river.  Never seen before, yet part of my dreaming. 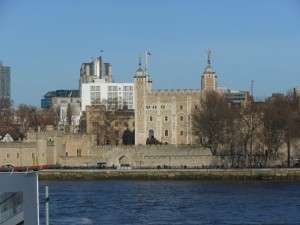 While perceived enemies of the realm and threats to the primacy of the monarch were being held across the river in the Tower, there were those who ventured forth, to lands unheard of, bringing back new ideas, knowledge and an increasingly wider world view.

As we head further into a new and rapidly evolving century, we may reflect on the the words of Helen Keller, and the need for us; for the sake of our children, to be optimistic.

No pessimist ever discovered the secret of the stars or sailed to an uncharted land or opened a new heaven to the human spirit.” -Helen Keller

I had set off from Aldgate East on one of London’s great hire bikes and ridden across the Tower Bridge and along the south bank.  The lyrics of the song seem to say it all.

London from Roger Pryor on Vimeo.