After attending TeachMeet BETT on Friday 1st Feb, it was time to leave London.  I’d hired a car to pick up and drop off at Gatwick and had no real plans beyond finding the villages in Hertfordshire which had been the home to the Pryor family prior to their emigration to NSW in 1838.

The transfer to Gatwick suffered a minor hiccup when I discovered that the District Line tube was closed for trackwork and I needed to take my first trip in a London cab across to Victoria station to catch the Gatwick Express.

Arriving at Gatwick, I was provided with my ride for the week.  Rentalcars.com had advertised a special which offered a BMW (or similar) for only about $70 AUD extra for six days than a Ford Focus (or similar).  What the heck?  I ended up with a Volvo wagon which had me initially thinking: ‘this is not a beamer.’  It proved to be an excellent vehicle however: leather seats, beautiful suspension, inbuilt GPS, great sound system with bluetooth etc etc. Plus, a diesel engine which provided heaps of power and the ability to effortlessly glide along at 70-80mph – the traffic flow speed on the motorways here.

Around the M25 and onward North, with some hastily scribbled directions in Evernote, to find Kelshall and Therfield: neighbouring villages in Hertfordshire. 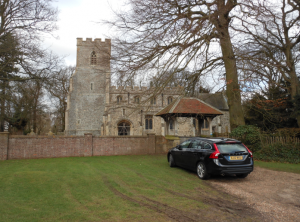 Off the motorway and into the English countryside. Narrow lanes and green; and a pause for reflection outside St Faiths at Kelshall. 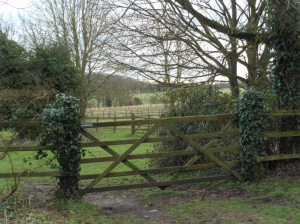 Here, amongst the green and richness of the countryside, it’s hard to imagine the dire situation back in the 1830s as the huge impact of industrialisation was taking its toll across the rural sector, leading to the passing of “Poor Laws” and the creation of assisted passage schemes and emigration of rural workers to NSW as a means of alleviating pressure on the need to provide for rural people approaching poverty, and also to boost the potential rural productivity of NSW by providing skilled farm workers. 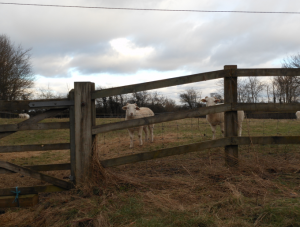 Sheep grazing lift their heads at the sound of a vehicle and rush closer: no doubt driven by the understanding that, when a pick is unavailable due to snow, the roadside cribs would be filled with feed.

This conditioning is reminiscent of similar scenes back home on the farm when the sheep would rush toward the Landrover knowing that it contained feed: ironically, in times of drought. 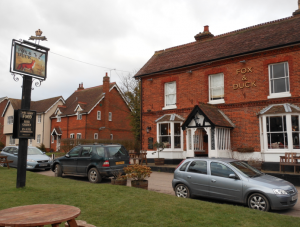 On to Therfield and another, slightly larger village, complete with pub.

The Fox and Duck was clearly a happy haven where it was possible to enjoy a quiet pint, a cup of tea, some lovely wines and what looked like excellent food. 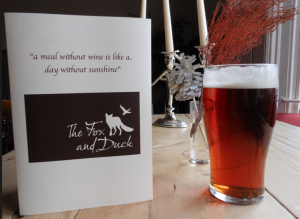 I enjoyed a quiet moment or two reflecting on the the fact that this was, for me, yet another part of my ‘dreaming.’

It was now on to Norwich, via Cambridge.