It’s been a busy week this week, with an ‘Ignite’ style presentation on Tuesday night at the Delaney as part of the combined Lunaticks Society and Slingshot ‘RipItUp‘ event.

For some reason, I got to be the first presenter on the night in a program full of great ideas, and an emphasis on creativity and the harnessing of ‘killer ideas.’

Within that context, it was good to ask the simple questions about whether, (when we are seeking to encourage and support the dreaming of dreams, and the building of the skills and attitudes necessary for entrepreneurship and vision); our current policy and community vision of what’s important in ‘schooling’ is still relevant.  Five minutes: 20 slides, 15 seconds per slide.

On Wednesday night, it was down to City Hall for the Newcastle Institute Candidates’ Forum.  I had the job as MC for the night and the candidates from the 2 major parties in both the seats of Shortland and Newcastle were put through their paces with a ‘personal’ chat with Felicity Biggins which sought to underscore the fact that political candidates are still fundamentally human beings and have personal values and priorities which drive their decision to seek office.  Then, all candidates presented their 5 minute ‘policy pitch,’ before being asked a number of questions by Newcastle Herald reporter Jason Gordon.

There was some chagrin expressed online afterward about the fact that only the candidates from major parties were involved and even that other seats weren’t involved.  No doubt those expressing these concerns haven’t caught on to the fact that the Newcastle Institute is simply a group of volunteers trying to promote and stimulate discussion and interest in topical matters within Newcastle and simply doesn’t have the resources beyond the small donation requested from event attendees.  That aside, it was great to see so many people turning out on a cold July Wednesday night to hear from our major party candidates.

Also announced this week was the speaker lineup for the inaugural DiG Festival coming up in October this year.

The DiG Festival and Conference is loosely based on the extremely successful SXSW festivals in Austin, Texas which are run over 3 weeks and cover Film, Music and Interactive. Over the years SXSW has helped Austin become recognised as a leading technology centre with a vibrant artistic culture. SXSW now contributes over $100 million to the Austin economy annually.

The Australasian DiG Festival and Conference will feature a series of Keynote Presentations, Panels, Performances and Workshops lead by international, national and local industry leaders. There will be a strong emphasis on innovation, entrepreneurial spirit and ethical business.

We aim to attract several major speakers to anchor the event and ensure that it is seen as a truly national or international event.

Featuring a great lineup of keynote speakers and a host of ideas in the areas of Design, Interactivity and Green Tech, I’m thrilled to be presenting a session on Designing Education Futures. 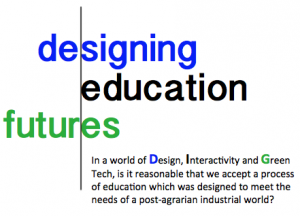 Have a look at the full lineup of speakers and program outline here. If you have ideas about what you think is important in designing education futures; from a community, parent, student or educator perspective, why not click the ‘Comments‘ link below and leave your thoughts.

6 Replies to “Great to get a gig at DiG”