Since the truncation of the heavy rail line into Newcastle there has been a growing mood of excitement as cranes become features in the sky; the rail lines have been removed and grass planted where once were rails, sleepers and ballast.  Access to the harbour is now easier and there are surely some very interesting times ahead as a new paradigm looks set to shift thinking about town ‘centres’ and what constitutes revitalisation.

Having moved to Newcastle in 2008, the changes have, for us, been hugely exciting as new buildings have emerged and quirky precincts developed; all within a city which is bikable and rich with cafes and bars; and an ease of getting around.

Some groups have been seen to delay progress or to simply be oppositional to any form of change without seeming to have a plan for anything other than letting what exists whither on the vine of past glory. Within the thinking of groups like this, the use of the term ‘developer’ has assumed a connotation of greed and exploitation which goes way beyond any sense of altruism or social contract at all.

As a pushback against this, a growing swell of social media traffic has formed into a wave of excitement and anticipation at the way that a ’New-castle’ might look. This wave sometimes crashes against any opinion of difference, calling out the naysayers and ensuring that those who support change are in turn well supported.

So, when it was announced that the V8 Supercars would be calling Newcastle home for 5 years from 2017, the general mood was one of excitement and anticipation at the fact that millions of people would be seeing footage of what a great place we live in and that thousands of people would bring pockets full of money to spend locally and interest which should lead to significant collateral opportunity.

After a little while, some of those who live beside the proposed track where cars are expected to hurtle by at great speed, started to ask questions about specifics; access to homes, actual length of the period of construction, contingency planning in case of emergencies or accidents. A section of the Council website has been dedicated to providing answers to many of these questions.

Unfortunately, these questions have seen those who asked them vilified and mocked in public; on social media and in the comments sections of the local press. The general consensus seems to be that they should simply ‘suck it up’ and ‘take one for the good of all Newcastle.’  Some of the tone of the commentary on the intellectual capacity and mental health of fellow Novocastrians has been frankly disappointing. 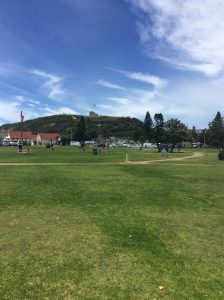 In the midst of all of this, however, there seems to have been little made of what is likely to be one of the greatest long term impacts on the public amenity of Newcastle.

in the latest iteration of a track layout it now appears that it has been mandated that a 300 metre section of new track will be constructed from the roundabout near the Nobby’s Surf Club straight across the existing carpark, roadway and lawn to meet with the carpark near Horseshoe Beach where there’ll be a very sharp left turn.

This will need to be a well engineered piece of track, with about 1.5 metres drop off in elevation between the roundabout and the carpark, not to mention the sheer intrusion of a bitumen racetrack bisecting the lawns which have previously been home to festivals like Fat as Butter, charity events and the well attended Anzac Dawn services. Presumably, in 2017, access to this area and its parking will be significantly impacted by construction and the fabulous work undertaken in forming Bathers Way potentially compromised.

And, it seems that this has been announced as a fait accompli: riding the excitement wave and driving a gash of v8 track blackness right through a public park.

Is this really what we are willing to give up in the name of ‘change’ and ‘progress.’